Eminent photographer Rahul Gajjar, founder of OMESSA has been extensively photographing Champaner-Pavagadh over the last three decades, trying to capture its various moods in different seasons, at various times of the day and year. His passion and love for the architectural jewels of Champaner gave birth to the idea of creating contemporary accessories for the woman of today.

A fusion of creativity emerged in 2015 when Sonal Maheshwari, a designer, collaborated with Rahul Gajjar to design and produce exclusive Fine Art Jewellery, Hand Woven Silk Sarees, Stoles and Scarves.

Omessa Fine Art Jewellery brings you exquisite heritage jewellery inspired by the delicately carved, wonderfully imagined, superbly executed architectural wonders of Champaner, each one equally beautifully designed, finished, and presented as the original inspiration. UNESCO World Heritage Site Champaner-Pavagadh is located 45 km from Baroda, Gujarat, with a history that dates from 2nd century AD and dotted with Rajput-Hindu, Jain and Islamic secular and religious monuments. It is spread over 6 sq km and comprises the fortified sacred hill of Pavagadh with the ancient Kalikamata Temple at its summit. At its foot, are the ruins and buried remains of Champaner, the sprawling, prosperous medieval capital city built by the pre-Mughal Sultans of Gujarat.

Throughout the history of our civilisation, the concept of the garden and the vegetation in it has had particular significance. Surrounded by hot climate, we in India have always appreciated the soothing impact of flowing water, the occasional greenery of isolated oasis or indeed the colourful vegetation of artificially created walled gardens, maintained with carefully calculated water technology. The pleasure gardens of rulers and the wealthy elite were a coveted luxury, but they had a spiritual dimension too, as they were often designed to echo the lush and refreshing vegetation of Paradise.

The concept of the garden with its rich flora had always been a central theme in the medieval architecture at Champaner. Intricate arabesque designs formed by overall symmetrical patterns of undulating stalks and split-leaves or split-palmettes invited reflection of the cosmic process of creation and the Divine Unity that underlies the infinite diversity of the material world.

Champaner-Pavagadh is perhaps the most authentic medieval city in India as all the information about the original city is available below the ground. The untouched nature of this information is significant to understand Medieval Sultanate capitals of regional India as predecessors of later Mughal style of architecture. 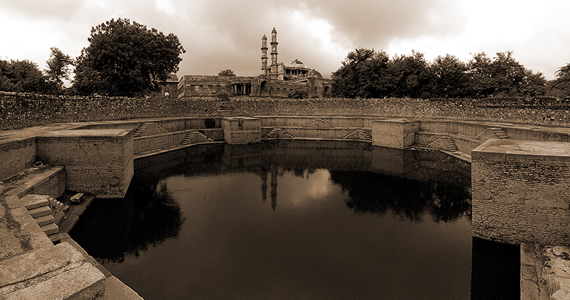 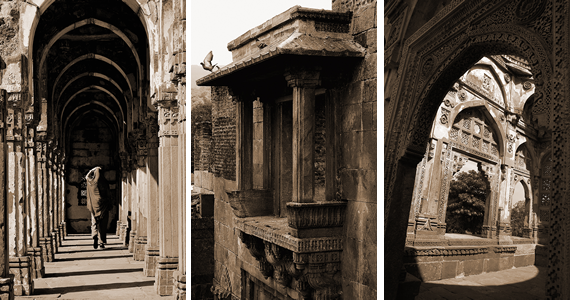 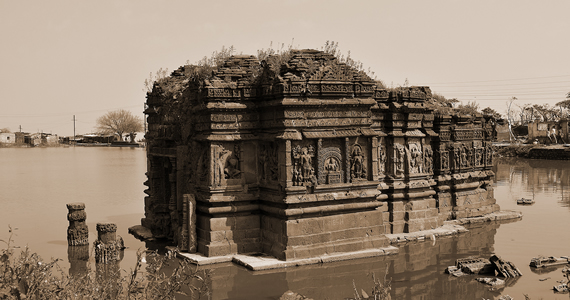 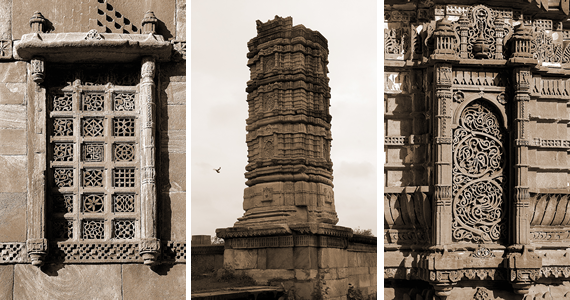 Treat each OMESSA piece of jewellery as if it were a family heirloom, for someday it may be!

The following are Terms and Conditions for access and use of the Website operated by OMESSA by Raaga Numerique, located at https://www.omessajewels.com (also referred to as "the Web Site").

OMESSA by Raaga Numerique through this Website aims to provide information and an online ecommerce web site for the sale and purchase of original designer jewellery/textile merchandise, and related accessories. The Web Site, information, tools, features and functionality provided by OMESSA by Raaga Numerique are referred to together and separately as "the Service(s)."

By accessing this Site, you accept, without limitation or qualification, the Usage Terms. You are only authorized to use the Site and its services

By accessing this Website and agreeing to the Usage Terms you get a limited, non-transferable license to use this site in accordance with the Usage Terms.

Your access to this Site may be terminated immediately in our sole discretion, with or without notice, if you fail to or comply with any provision of law, this agreement and/or additional terms, or if you act in a manner detrimental to the interest of OMESSA by Raaga Numerique or the Website, or for any other reason.

You expressly agree not to:

OMESSA by Raaga Numerique, does not guarantee the exactness as to appearance, finishing, colour, quality etc. of the products as ordered by you, except as may have been specifically stated.

Payments on OMESSA by Raaga Numerique can be made through Debit Cards, Credit Cards, Cash Cards, Net Banking and Cash On Delivery.

COD is an option to pay at delivery for your product instead of, in advance.

Products sold by OMESSA are specially designed to enhance the user's own energy. Our jewellery and healing crystals are empowered by the user's own personal intentions to change or improve themselves. As an energy enhancer, OMESSA products rely on the user to be effective. The responsibility for empowering the energy enhancing capability of the jewellery and crystals by OMESSA is solely with the user. Therefore, OMESSA products do not constitute a warranty, guarantee or prediction regarding the outcome of an individual using any specific product. While all our products are sold and advertised in good faith, results and outcomes do vary and cannot be guaranteed. OMESSA accepts no responsibility or liability for the effectiveness of the products sold herein.

We, at OMESSA, are not medically licensed physicians and cannot give out medical advice. Healing crystals should be used as a complement to other therapies and not as a replacement for medical treatment, diagnosis, or examination. For medical advice, please consult a licensed healthcare specialist. When you purchase and/or use an OMESSA product, you agree to fully release, indemnify, and hold harmless, OMESSA, its principals, owners, personal representatives, consultants, employees and assigns from any claim or liability whatsoever and for any damage or injury, personal, financial, emotional, psychological or otherwise, which you may incur arising at any time out of or in relation to your use of the Products sold on this website. If any court of law rules that any part of the Disclaimer is invalid, the Disclaimer stands as if those parts were struck out.

We at OMESSA have your best intentions at heart. We sincerely hope that each of our users has a positive and insightful experience with our Products. If you have any questions regarding the above, please do not hesitate to reach out.

If you browse through the Site without entering any personal data, we will gather and store certain information about your visit.

This information does not identify you personally and cannot be linked back to you unless you decide at some point to identify yourself.

If you are only browsing, we collect the following information:

We collect the email addresses and/or other available information of consumers who communicate with us or through our authorized vendors via email.

In connection with transactions which occur through the Site, we collect and store the following personal information:

If you choose to transmit, submit or post information to the Site, we will collect that information you provide.

We retain this information as necessary to resolve disputes, collect fees, provide customer support, enhance user experience, measure interest in our services, inform users about services and updates, provide security features, detect fraud or other criminal activity, and troubleshoot problems as permitted by law and pursuant to our Terms of Use.

We may place "cookies" on your personal computer or any other device that you use to access the Site.

"Cookies" are small identifiers sent from a web server and stored on your devices hard drive, similar to a license plate, that help us to recognize you if you visit our website again. Also, our site uses cookies to track how you found our site.

Cookies are not designed to be used to get data from your hard drive, your e-mail or any other personal data about you.

To protect your privacy, we do not use cookies to store or transmit any personal information about you on the Internet.

You can reject cookies by changing your browser settings.

Please note, however, that if you reject our cookies it is possible that some web pages may not properly load, your access to certain information might be denied or you might have to enter information about you more than once.

This site has reasonable security measures in place to protect the loss, misuse and alteration of the information under our control.

However, while we try our best to protect the information, we cannot ensure, warrant or undertake complete and total security of the information since, no data transmission over the internet can be guaranteed to be completely or totally secure.

Thus any information you provide to us and you do so at your own risk.

Any query or information required regarding this policy should be directed to the following email address: talk@omessajewels.com

All disputes would be subject to the exclusive jurisdiction of the courts at Vadodara.

Our return policy is clearly defined for each product on its page.

At present, we do not have an exchange policy.